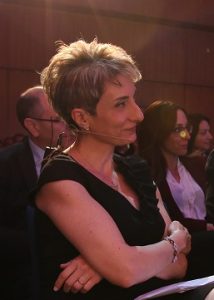 Angela is the Manager of IDEA, an Incubator – Accelerator for Startups and an Entrepreneurship Hub in Cyprus, aspiring to develop investible startups and change the Cypriot culture more towards innovation. With a diverse career in banking both in Cyprus and abroad, has worked in all lines of business and with all types of customers. She has long been involved in intrapreneurship and has carried out successfully several innovation projects within the organisation.
Angela is a coach, a mentor and an advisor to several young, aspiring entrepreneurs throughout their journey form idea-stage to revenue-generation. She has been a judge and a panellist in several startup competitions and conferences and has led several delegations for innovation field-trips in Israel, Greece and in the UK. She is also a member of Round Table Forums regarding innovation in the country, whereas she has organised and delivered workshops on youth entrepreneurship.
Angela has frequent presence in the Media in line with the intensive efforts of promoting innovation and entrepreneurship amongst the youth of Cyprus.
Angela holds a BSc in Financial Services from the University of Manchester, a BBA in Management Information Systems and an ΜΒΑ from the University of Birmingham.